We left JOG after dropping the machine off at the Sea View Hotel - it looks over the sea. Lorraine is chauffeur of  our wedding white hired Astra and she swiftly  conveys us to the Gill Bay ferry port where we embark. As we cross we learn Island information and I am intrigued by the concept of Ferell Cattle. Ironically two hours have past since finish and we experience the first spot of rain since Dartmoor. Again silently reflecting on the last 10 days I can't help thinking how very lucky we have been.
The Captain is in boyant mood and a sense of excitement is clear at the thought of marrying the Lovely Lorraine. However I am aware that it's not in not in the psyche of the Veteran Coldstream Gaurdaman to admit to such emotion. We have a 3 island hop to Orkney over causeways and arrive at the Shores Hotel which will be our home for the next three days. It's a real place with a public locals bar attahed and is certainly a winner with the Stoker. We meet Baz and Sophie, Sophie is a lifelong freind and will be Lorraine's number 1 today. ( we avoid all that matron of honour stuff as its been embargoed by the bride) Then The Coombe's best kept secret arrives to be a part of its worst kept secret - Spike and Ev Charles sat at the bar. From a distance the Captain declares ' He looks like Spike' and indeed he did - cause he was.( a big effort Spike and Ev and great to see you both) So six becomes eight and as we all tuck into a few bevs and fish cakes. The men discuss how their kilts fit -  as men do. The Ladies discuss stuff that ladies discuss. I don't know what this was because I wasn't listening. After an action packed day we all retire early to catch up on sleep and other stuff. The local malt - large one for I ensures uninterrupted sleep in a silent Kirkwall.
This morning we meet mein host Michael  - he furnishes us with endless Orkney knowledge. His breakfast is mainly superb and just what a Stoker needs to revive a much older than was body - haggis, then haggis followed by haggis. In to town where we bump into Gretton and Ford locals Lotty Mullvein and Julie Alvis (As you do) Chuckling in mind I consider the naivety of the idiots who travel off miles away for weekends of infidelity and think they will get away with it.
We wander round this town that seems to just trickle on at its own pace and organise a few finalities including beard trims and haircuts and the inclusion of a suprise piper for after the Wedding.
As we return to the hotel It is a poiniant moment as  we stand in silence for a 100th memorial Somme service outside the Cathederal. It's accompanied by the chilling sound of the piper, I feel both humbled and moved for this lasting tribute to our fallen. Only yesterday we cycle over the top passing a War Memorial. The captain highlights the horror of being drafted from a crofters
cottage to the trenches in the wink of an eye 'Poor Bastards' he mutters,  my silence was agreement of a  statement that said it all.
As I blog up the day thus far I am pleased to see my wife ironing my shirt ( in fact all the men's shirts) for the formalities in waiting. A few hours chiling out and the union will be underway. Sarah appears to be excited at the prospect of seeing four men in skirts.However I am aware of an underlying paranoia that I may enjoy it.
Putting the kilt on to a DIY video could have gone utube viral if published - I now understand why the feminine form takes so long to get out the house when off for a Jolly. We get a shot of the Captain dropping the wallet into the sporon aware that's the last we see of it.
After the compulsory drink we walk to the Town Hall in full regalia. Concerned  not to create a spectacle we of course go unnoticed in the native attire. The ceremony is simple, as was the request of the captain and his bride had ordered. 'Don't worry' he chortled earlier over a coffee ' you'll be stood up before your sat down' - and so it was to be.
Indeed we were and although a simplified set of vows they were never the less conducted in a serious and respectful tone. We have a bottle of fizz out on the street outside the Town Hall and the newly married couple are serenaded by the piper. A Wedding meal in the hotel tonight will complete a fantastic day.
We have a few extra days to take in some more Orkney culture and then the big bird home Saturday.
A happy journey with a more than happy end. We wish the Newly Wedds a long and happy life together. Here Endeth the Blog. Over and Out
The Stoker - XXXXX 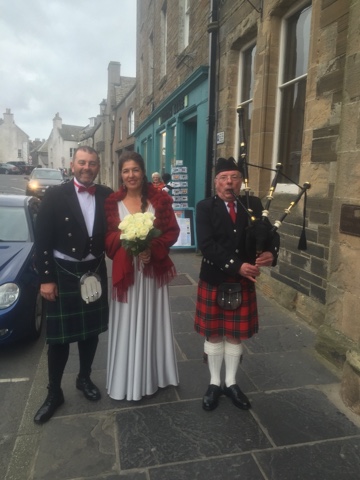 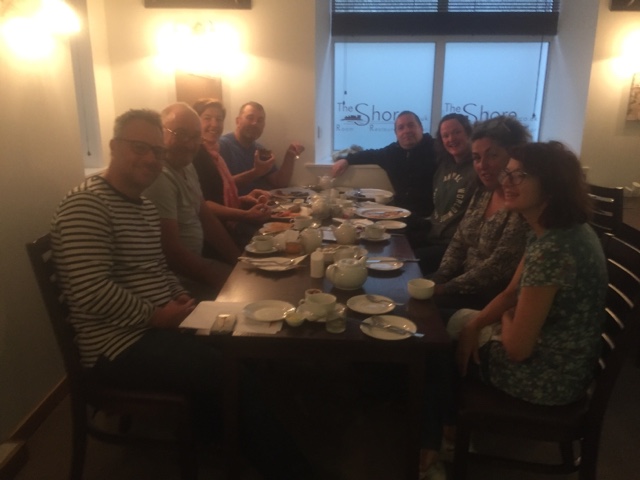 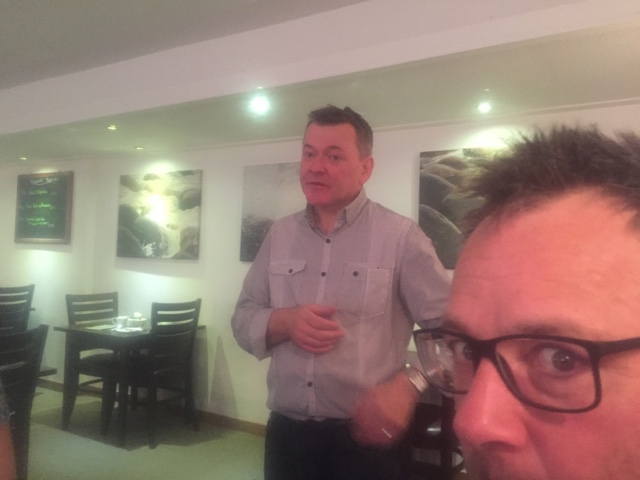 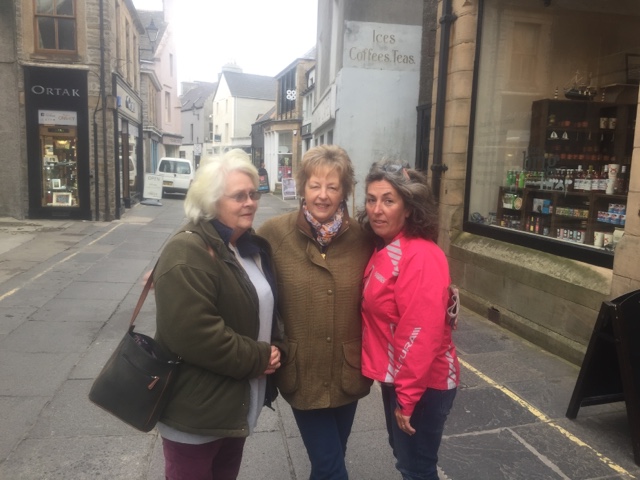 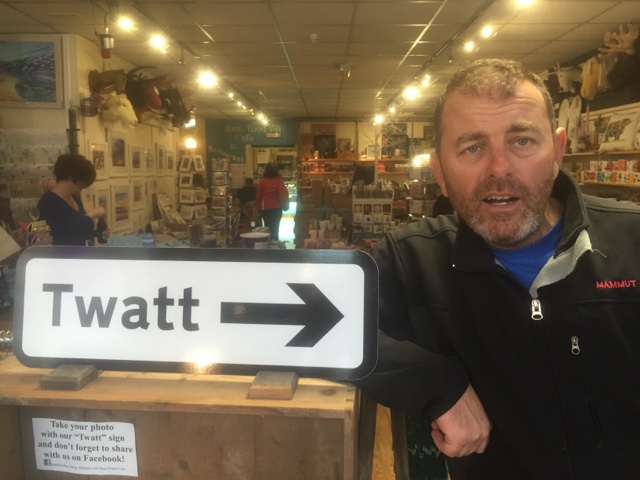 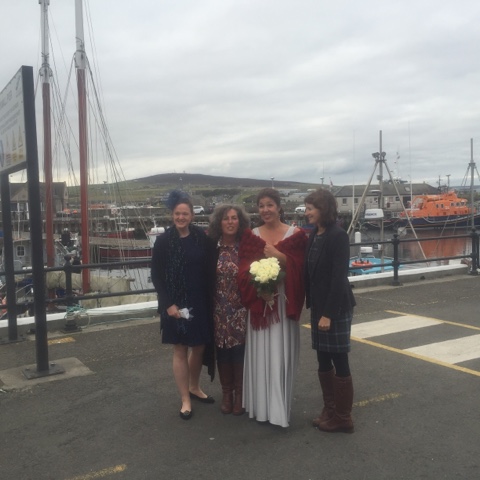 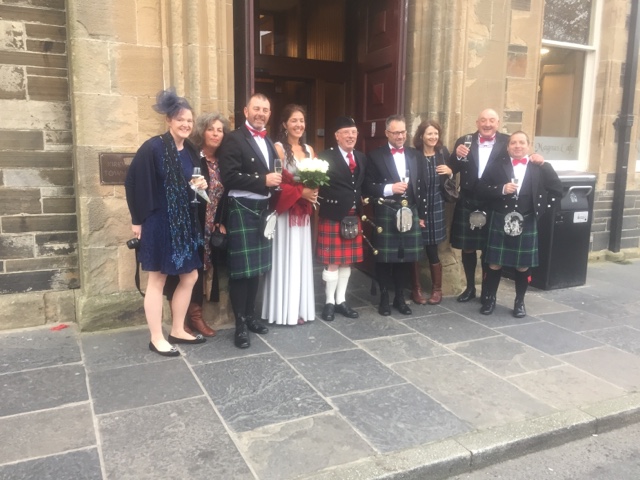 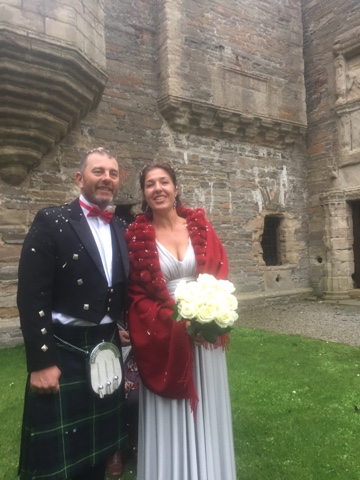 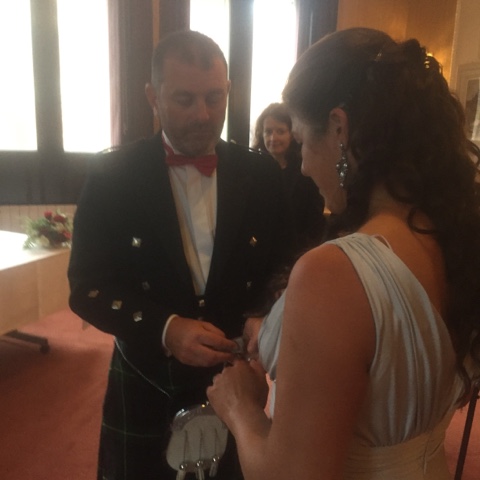 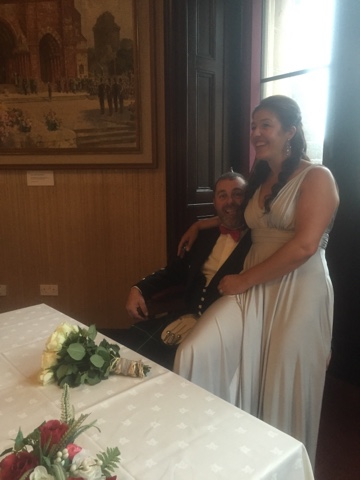 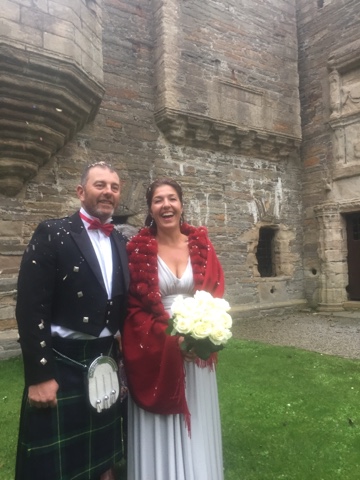